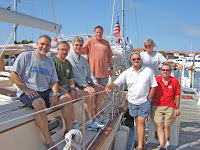 After a day of preparation, the crew of CELESTIAL departed Burnt Store Marina in Punta Gorda Florida at 1:45 PM on Monday April 21, 2008. The first leg of their passage will be a non-stop cruise to Key West. Captain Andy Prescott expects this leg to take 24 hours and so the crew will reach Key West by early afternoon on Tuesday April 22, 2008.

Pictured here are crew members Manny Rosa, Richard Dixon, Wolfgang Linke, Bill Magness, and Jim Spilbor with Captain Joe Kliment and Captain Andy Prescott. Captain Joe Kliment, who lent his vast expertise in the preparation of the crew for the journey, reports that "these guys will be a GOOD crew! They were a pleasure to work with!"

Further details on the voyage will be posted here as comments to this original post. Thanks, as always, to Ruth Kliment for the crew picture!
Posted by Rita Hanson at 20:32 3 comments: 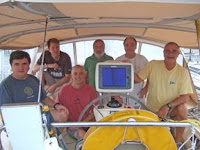 The second Dry Tortugas ASA 106 cruise was as challenging and enjoyable as the first. The crew provisioned on Saturday, March 22, then prepared the boat for departure. No one felt threatened by the heavy rainstorm with serious thunder and lightening overnight, since CELESTIAL was still at the dock.

We departed at 8:30 March 23, Easter Sunday morning, with good winds and beautiful weather, sailing on a great broad reach down the Gulf toward the Dry Tortugas. The students practiced dead reckoning and learned to use the ship's radar, observing traffic along the way. We had previously divided into 3 teams, with a watch schedule of 3 hrs on and 6 hrs off. It was a pleasant overnight sail with a swallow coming aboard the boat for much the night.

We arrived at the Dry Tortugas, after carefully running the course to Ft. Jefferson, where we anchored at 11:30 AM Monday, March 24. The crew toured the Fort and rested after the long sail. Unexpected excitement arose on the dingy trip back to CELESTIAL, when the engine of the dink failed this crew - leaving us adrift without paddles. With wind gusting to 30 knots, one crew member quipped “We're on our way to Cuba!”.

The National Park came to our rescue, when Ranger Jason Olds arrived in a large inflatable patrol boat and towed us back to CELESTIAL. (The dink engine was later found to need a tune up and carburetor adjustment.) The heavy gusting winds caused other boats to drag anchor through the night, but our properly set anchor, with plenty of chain rode held firm.

On Tuesday, March 25, we prepared our main meal at noon and departed the Dry Tortugas at 3 pm for our second overnight sail. With 25 knot east winds on the nose, we motor sailed through 8-10 ft seas. This rough ride, in the blue water south of the barrier reef, was the biggest challenge for this crew thus far. Like true seasoned sailors, this crew took care of each other!

Arriving at the outer mark for Key West at 7:30 AM Wednesday, March 26, we were surprised to see a nuclear submarine and it's tender nearby. Proceeding up the channel we were indeed fortunate to get the last slip available in Conch Harbor Marina. The challenge of docking this large vessel in such a narrow lagoon brought (well deserved) applause from the bystanders. The crew toured Key West and thoroughly enjoyed a meal ashore. Luckily the weather was kind and sleeping conditions comfortable, since the air conditioner on the vessel failed (this was later found to be a cooling water problem)

On Thursday, March 27, we ate an early breakfast before departing Key West via the North West Channel. Setting the genoa, staysail and full main while beating into a 15-20 knot NE wind, the crew was exhilarated to be speeding along at 8 knots. Some time later, we found the autohelm was non-functional, so we manned the wheel for the next 24 hrs. By evening the winds had diminished and we motorsailed through the night. Shortly after sunset, a large osprey circled CELESTIAL, landing on the bow pulpit to accompany us for a 6 hr ride.

A beautiful sunrise off of Captiva Island found us motoring, with no wind for an uneventful return to Burnt Store Marina at 11 AM Friday March 28. We refueled and pumped out, then docked and cleaned Celestial. Since there were no students testing for ASA 106, this cruise was now completed and the crew began to depart. The 5 student crew members had become good friends though this challenging experience and we plan to stay in touch in the future. It was truly a cruise to remember for all of us!

Welcome to the MDS blog!

The Maryland School of Sailing and Seamanship, offers a full range of courses from Basic Sailing through Ocean Training Cruises on Island Packet yachts in the Chesapeake Bay, Virgin Islands, Pacific Northwest and the Atlantic between Mystic, Norfolk, Florida, Bermuda, Bahamas and the Caribbean, as well as classroom or homestudy Celestial and Coastal Navigation classes.

At the Maryland School of Sailing and Seamanship, helping people become exceptional sailors is our passion. That's why our reputation as a serious school for serious sailors follows our students wherever they go. We don't cut corners or compromise safety to sell certifications. We simply offer the best sailing instruction and turn out the finest sailors found anywhere. Enjoy our blog, and please also visit our website.

Our IP 440 CELESTIAL under sail

Celestial, our Island Packet 440, with an intermediate level crew in the Virgin Islands